This guide, targeted towards faculty and researchers, provides an introduction to the various metrics used to measure scholarly research impact.

Tips to Increase Citations to Your Publications

Publish in high impact journals. Before publishing your article, use Journal Citation Reports or CiteScore to find out which journals have the highest impact in your field.

Visibility. Maximize visibility of your research by publishing in open access journals and/or depositing your work in AUB ScholarWorks.

Use a constant name syntax or use your ORCID iD. Be consistent when writing your name or provide your ORCID iD when submitting your work to avoid author disambiguation that might affect your citations.

Search engine optimization. Include important keywords in your abstract and title as these will help your work to be discoverable by search engines and databases.

How is document impact measured?

Below are some research metrics that measure a document's impact:

Citation Count: Is the number of times a document has been cited.

Field Weighted Citation Impact (FWCI): ​Shows how well cited a document is when compared to similar documents. A value greater than 1.00 means it is more cited than expected according to the average taking into account the year of publication, document type, and disciplines associated with its source. FWCI is the ratio of the document's citations to the average number of citations received by all similar documents over a three-year window. Each discipline makes an equal contribution to the metric, which eliminates differences in researcher citation behavior.

How to get document metrics using the below databases?

Scopus may be used to find citation counts for individual publications. For example:

Scopus may also be used to find the Field Weighted Citation Impact and PlumX (altmetrics). For example: 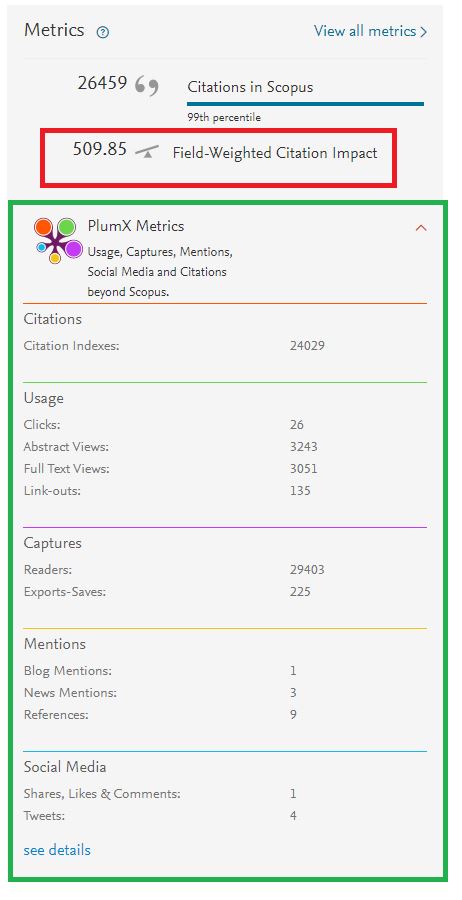 Web of Science may be used to find citation counts for individual publications in addition to usage count (a measure of the level of interest in a document). For example:

Google Scholar may be used to find citation counts for individual publications. For example: